Spleen Elegy is Jason Labbe’s long-awaited debut collection of poems, a book that negotiates the bewilderment of waking from trauma into the strange and unfamiliar landscape that is digital America. Aesthetically varied, these poems present a soundscape that modulates seamlessly between fuzzed-out guitars and trees full of morning birds, between a radio station of translucence and a shore of digital noise. In the painfully beautiful spaces of Spleen Elegy, music, the natural world, and motors rumbling on the interstate never fail to rise above the chatter.

With images by Melanie Willhide.

Let’s twin and twine together two primary aspects of how America can see herself—the good atoms of Whitman’s leaves of grass, and the engines humming their freedom on the highways that cut across those 19th century fields. Now, Jason Labbe well knows, as Whitman’s atoms become pixels, we find ourselves at a crossroads, learning again and again the consequences of “the indescribable way you shape / a past of little use.” Seeking to find that law or logic to shattering, be it in the memory-echo of personal trauma caught on infinite loop in the mind, or be it the dismal virtualities of the post-modern ether, the poems of Spleen Elegy unfold their rueful nostalgia: “I have something accurate to say that lacks perspective.” That may well be the very accuracy we most need, riding the routes of America, the byways and frontage roads, seeking anyone who is willing for a poem or two to see. —Dan Beachy-Quick

“A chunk of broken tar”—that’s the color of this book. And the sound of this book is “a train in the static.” Its poems count time in “decaseconds of dusk.” To read this book is to feel the uneasy passivity and unerring stuckness, the particular absurdity, of certain citizens stuck in this millennium. So many lines made me laugh. And sigh. But not cry. Jason Labbe is great at melancholy. Baudelaire’s mosquito is definitely here: “I am Past / who passing lit and sucked your life and left.” The future is unthinkable and unalterable. Except. Except! Lucretius’ swerve is also here. Atoms may veer randomly, which is extra significant in a book that takes place mostly on the road. “My sutures are beautiful as a tread pattern,” he says, and it is easy (and dangerous) to fall in love with Labbe’s strangled version of optimism. —Darcie Dennigan

I’m drawn to Spleen Elegy’s Whitman, perhaps, because Labbe makes him haunt “hard-hitting cities.” Here I can hear the Whitman of “Crossing Brooklyn Ferry,” whose ebullience in “the impalpable sustenance of me from all things at all hours of the day” is for a moment detached from all those nineteenth-century-looking fields of grass. In Elegy, Whitman’s sustenance is instead drawn “from fire escapes and water towers, / from F train faces and sidewalk chatter.” So is that of Labbe’s speaker, the consciousness that is both listening to and watching the pixilation of phrases, memories, delusions, ghosts, road-artifacts.—Matt Salyer, Colorado Review 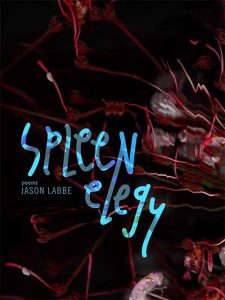